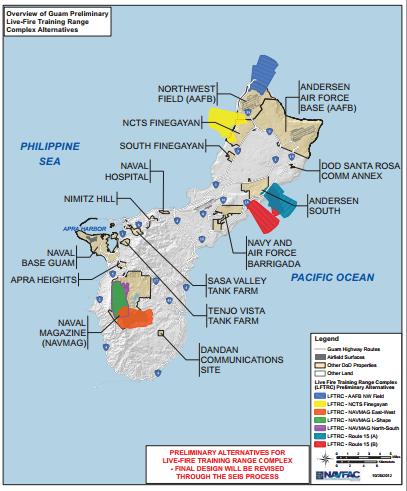 No matter where the Marine Firing Range Complex is ultimately located, the site will only be closed off during live firing sessions. That is one of the messages being delivered at the Navy’s expanded SEIS scoping meetings this week.

According to information being provided at the public meetings, training will go on at the range about 39 weeks a year, Monday through Friday 8 a.m. to 5 p.m.

Weekends, most nights, and all of the remaining 13 weeks a year, the property will be unrestricted for civilians.

That civilian access will be maintained for any private or GovGuam land is an important point for the Navy, which faced vocal opposition to the originally proposed location along Route 15 at the Pagat Caves area of Yigo.

Muddled messaging during the initial EIS period led many in the community to believe that Pagat would be closed off permanently should the firing range end up there.

Part of the rational for the expansion of the SEIS is that more of the housing and cantonment footprint may fit on existing federal property than previously thought, now that the size of the Marine force relocating to Guam has been scaled back.

The entire training complex and cantonment may now fit within existing DoD property at Anderson, Finegayan, and Big Navy; meaning possibly no additional private or GovGuam land will be required for the Marine move.

The Department of the Navy issued its Notice of Intent in mid October to expand the scope of the ongoing Supplemental Environmental Impact Statement for the Marine firing range to include the main cantonment, including family housing.

Under the expanded scope, the Navy expects to have the SEIS completed sometime in 2014, according to Department of the Navy’s official Guambuildup website. That timeline would push a Record of Decision on the SEIS, and thus the Marine Base Relocation, to 2015 or later, the website states.

The Navy issued its Final EIS for Guam and CNMI Military Relocation in July 2010.

However, the preparation of a Supplemental Environmental Impact Statement began after local opposition and budgetary concerns at the federal level led to the decision to the change the location of the Live-Fire Training Range Complex.

With the announced downsizing of the base realignment earlier this year, the Navy decided to expand the scope of the SEIS to factor in those additional changes.