…from “Liquor Taxes and Sexually Transmitted Infections” by Nicholas Bakalar in the December 17, 2015 issue of the New York Times:

Maryland increased its liquor taxes in 2011 and a sharp decrease in the rate of new gonorrhea infections immediately followed. Researchers have determined that the two events are closely linked.

The study, in The American Journal of Preventive Medicine, used three control groups to exclude other explanations for the decline. The first control group included all states that did not change alcohol taxes. The second group looked at states that did not share a border with Maryland, in order to avoid bias from people buying liquor in nearby states where the taxes were lower. And the third group eliminated states in which the government has a monopoly on hard liquor sales, since prices may rise in those states even without an increase in taxes.

In 2011, the Maryland liquor tax rose to 9 percent from 6 percent. After the increase, Maryland’s gonorrhea rate declined by 24 percent — the equivalent of 1,600 cases per year. There was no decrease in the control states.

“Policy makers should consider raising liquor taxes if they’re looking for ways to prevent sexually transmitted infections,” said the lead author, Stephanie A.S. Staras, an assistant professor at the University of Florida College of Medicine. “In the year and a half following the alcohol tax rise in Maryland, this prevented 2,400 cases of gonorrhea and saved half a million dollars in health care costs.”

Here is Gonorrhea rates from 2004 – notice a decade long downward trend that started long before the new alcohol tax: 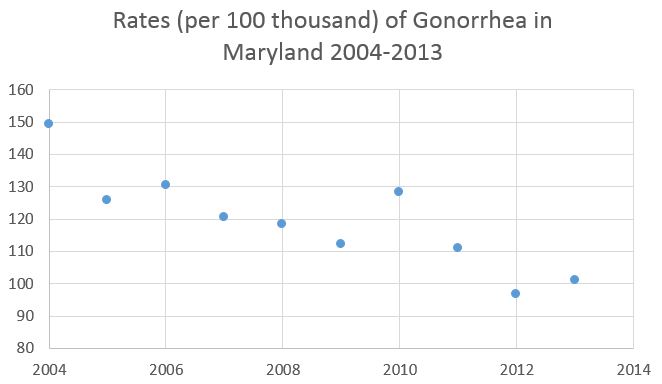 How about this, from the abstract for the study:

Regardless of the control group that was considered, results showed no significant changes in chlamydia cases following the tax increase overall (Table 1) or within subgroups.

So, an existing downward trend in gonorrhea continued, and there was no change to chlamydia. Based on that “Policy makers should consider raising liquor taxes if they’re looking for ways to prevent sexually transmitted infections”?

Postscript: In case you read through the story, and abstract for the study and were wondering, as I was, if alcohol consumption even went down after the tax increase, here is some data:

Per Capita consumption of Alcoholic Beverages in Maryland by Year

It appears there is a downward trend from 2009, the same year as the market crash. 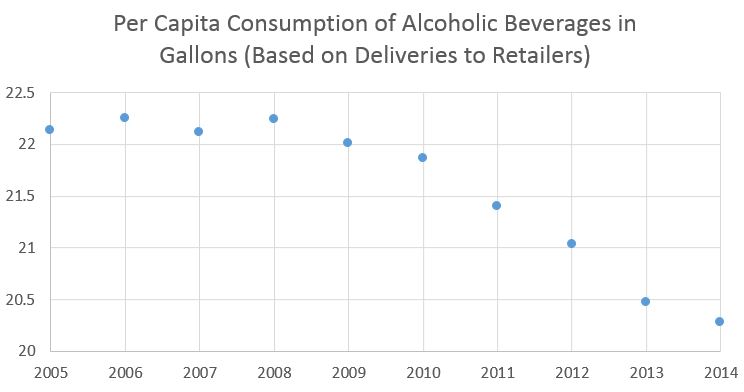 But, not all ‘beverages’ are created equal, so here is consumption of ALCOHOL – assuming ABV of 5% for beer, 13.5% for wine, and 40% for liquor. Consumption goes down starting in 2011, the year of the tax increase. If the decrease were solely explained by the tax, I would expect it to be a one time drop that leveled off in 2013. The decline between 2010 isn’t quite as precipitous as it appears in the graph (scale matters), but it is 8 onces of alcohol difference per capita – that’s 20 onces of liquor, or 13 beers, or two and a half bottles of wine. It is only a 1.3% decline in alcohol consumed per capita between 2010 and 2012. 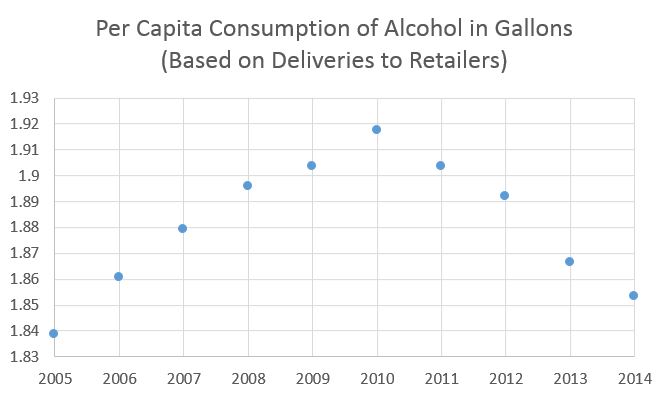 …from “The U.N. Sent 3 Foreign Women To The U.S. To Assess Gender Equality. They Were Horrified.” on HuffingtonPost.com on December 15th by Laura Bassett:

A delegation of human rights experts from Poland, the United Kingdom and Costa Rica spent 10 days this month touring the United States so they can prepare a report on the nation’s overall treatment of women. The three women, who lead a United Nations working group on discrimination against women, visited Alabama, Texas and Oregon to evaluate a wide range of U.S. policies and attitudes, as well as school, health and prison systems.

Another main area of concern for the delegation is violence against women — particularly gun violence. Women are 11 times more likely to be killed by a gun in the United States than in other high-income countries, and most of those murders are perpetrated by an intimate partner. While the Obama administration has talked a lot about combatting [sic] violence against women, its efforts have been frustrated by Congress’ inability to pass new federal gun restrictions.

“Some states have introduced gun control laws regarding domestic violence, refusing to give perpetrators of domestic violence the right to possess firearms,” [Frances] Raday, [the delegate from the UK] said. “This should be a national policy, not an isolated state policy.”

The Domestic Violence Offender Gun Ban often called “the Lautenberg Amendment” (“Gun Ban for Individuals Convicted of a Misdemeanor Crime of Domestic Violence”, Pub.L. 104–208, 18 U.S.C. § 922(g)(9)) is an amendment to the Omnibus Consolidated Appropriations Act of 1997 enacted by the 104th United States Congress in 1996, which bans access to firearms by people convicted of crimes of domestic violence. The act is often referred to as “the Lautenberg Amendment” after its sponsor, Senator Frank Lautenberg (D – NJ).

The Correct US Poverty Rate Is Around And About Zero

Who’s poor in America? 50 years into the ‘War on Poverty,’ a data portrait

Are We Really Going to Sell Socialism in This Country Based on the Fact that the Middle Class is Getting Rich?

Based on In-State Tuition rates for the Seattle Campus for Autumn 2015 Quarter, total cost for the three courses would be $3,947.

All three courses are available at Bellevue Community College in Bellevue, WA. The courses can be transferred directly to UW. Based on In-State Tuition rates for Bellevue College for 2015-2016 academic year, the total cost for the three courses would be $1,282. That’s 1/3rd the cost.