Actually, it’s pretty much always been at an all time high.

Our first priority is making America a magnet for new jobs and manufacturing.

After shedding jobs for more than 10 years, our manufacturers have added about 500,000 jobs over the past three. Caterpillar is bringing jobs back from Japan. Ford is bringing jobs back from Mexico. After locating plants in other countries like China, Intel is opening its most advanced plant right here at home. And this year, Apple will start making Macs in America again.

Leaving aside the president’s weird fixed pie allusions, It really is only the jobs that have been disappearing, not the output (as Obama is well aware).

Here is manufacturing output and manufacturing employment in the United States since 1975. Though the start end years for the graph were already chosen for me, I think 1975 is a good year to start because it’s around that time everyone points to as the beginning of the decline in U.S. manufacturing: 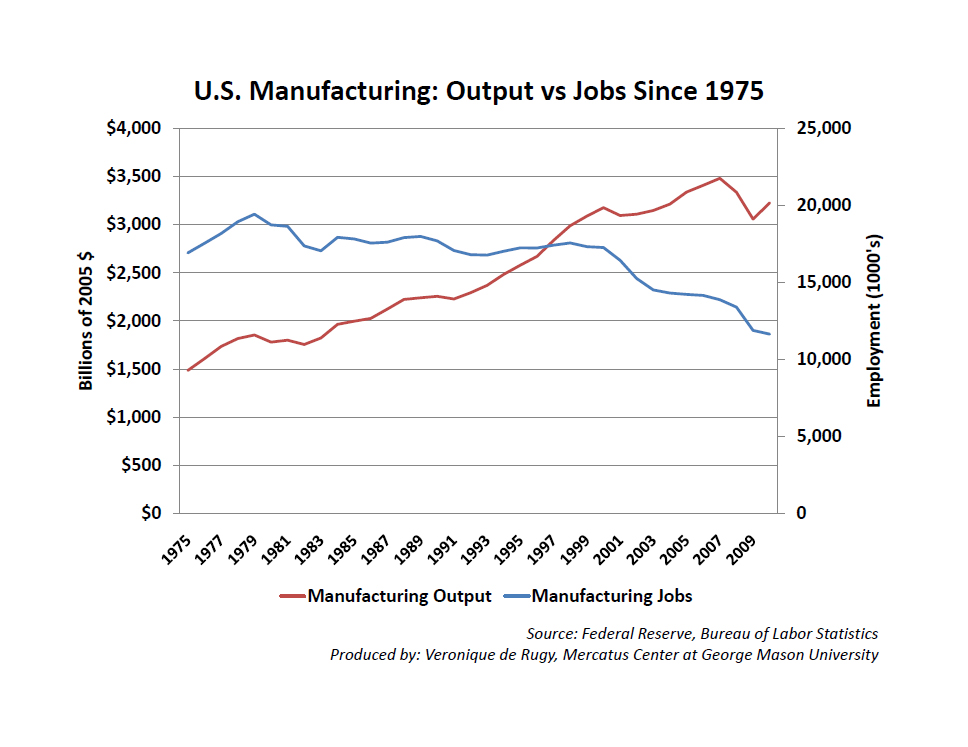 Also worth busting before I go up to eat breakfast: the notion that the United States used to be all about manufacturing, until the 1970s, when everything started going overseas. Relatively speaking, this just ain’t so. Manufacturing has NEVER been the largest sector of the economy, not by output, not by employment. 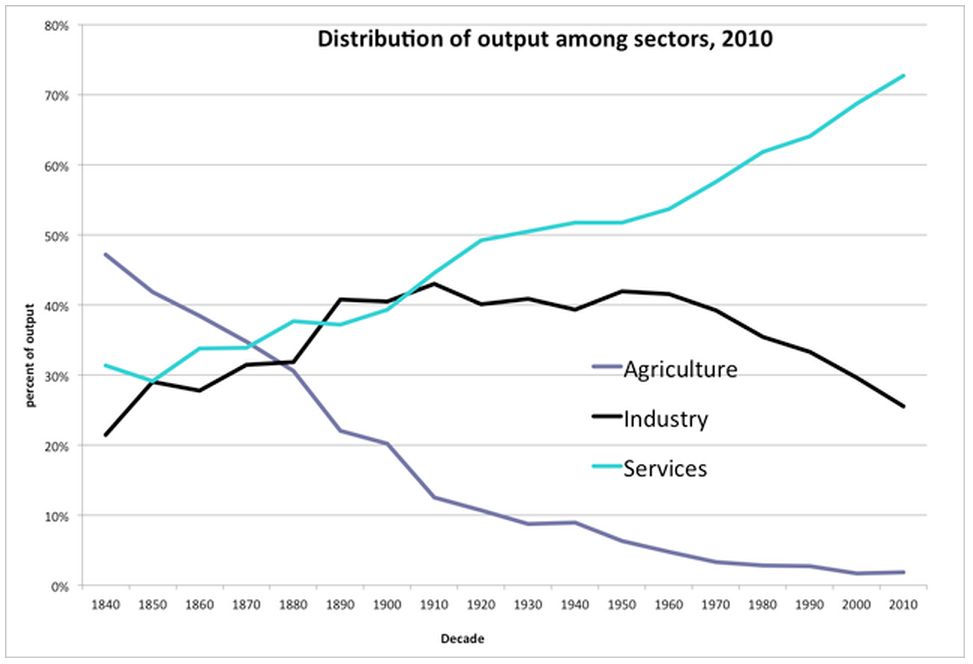 Sorry, I guess output in manufacturing accounted for a plurality of total output for a few (20ish) years in the late 19th century. But, even then, 59 percent of output was services and agriculture.

And here is private sector employment, only from 1948, because that’s what I found when I googled this all up: 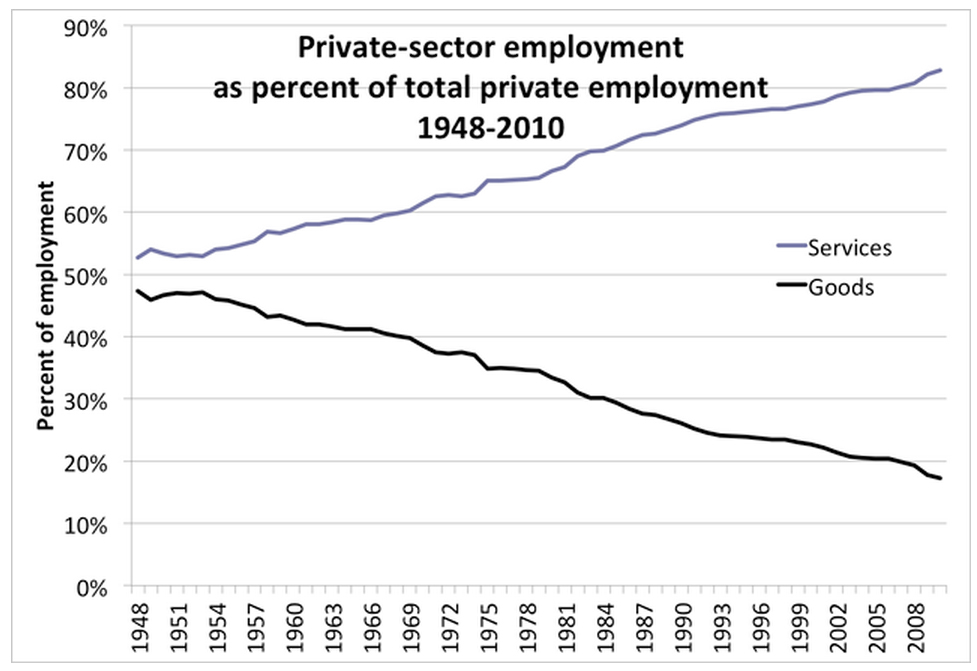 I know that’s a lot of weird start and end dates to deal with. If you could combine all the data (which you can), you would get a picture of the U.S. economy that looks something like this: manufacturing output has always been on the rise, and it continues to rise. For a long time, output increased faster than gains from productivity, so that employment in the manufacturing sector continued to rise. Starting around the mid-1970s, U.S. manufacturing productivity really began to take off. The economy hasn’t just learned to produce more with less at the margins. The whole industrial base has shifted, so that more is produced with less total labor, not just less additional labor. As a result, manufacturing jobs have and will disappear, both in total numbers and as a share of all jobs.

Except for forcing us back to the stone age, there isn’t really anything the government can do to change that. Even if you accept for argument sake that government lead forays into manufacturing R&D are the best way to go to spur economic growth – again, POTUS from SOTU:

Last year, we created our first manufacturing innovation institute in Youngstown, Ohio. A once-shuttered warehouse is now a state-of-the art lab where new workers are mastering the 3D printing that has the potential to revolutionize the way we make almost everything. There’s no reason this can’t happen in other towns. So tonight, I’m announcing the launch of three more of these manufacturing hubs, where businesses will partner with the Departments of Defense and Energy to turn regions left behind by globalization into global centers of high-tech jobs. And I ask this Congress to help create a network of fifteen of these hubs and guarantee that the next revolution in manufacturing is Made in America.

UPDATE 3/9/13: According to this website, at least as late as 2009, THE UNITED STATES REMAINED THE WORLD’S LARGEST MANUFACTURER:

21 percent of all global manufacturing output with only about 4.2 percent of population. No bad. Not bad at all.

According to this recent article from the University of Washington’s student newspaper, student employees at u-dub’s cafeterias didn’t know that it was against company policy to steal food:

At least 16 food service workers were fired last week by Housing & Food Services (HFS) on fault of stealing food. More than 140 workers are being questioned about possible theft activity, including at least 119 student employees and 24 full-time staff members.

Workers were giving away free food while pretending to ring up purchases.

But, here is the really good part:

Kyle, who wasn’t one of the employees fired, admits workers were stealing food. But he said the practice has gone on long before he began working in April, and he doesn’t think HFS took enough time to listen to students’ take on the matter.

“HFS made this quick judgment and swooped in and started firing people without warning,” he said. “They definitely could have talked to the students.”

Did you get that? The policy wasn’t clear to him. The policy that you shouldn’t pretend to ring people up. Is this guy out of his mind? I don’t think so. Far from it probably.

It’s easy to rationalize this sort of outright theft when you feel undervalued and taken advantage of by corporate profiteers. The thinking probably goes something like this:

“The owners of this place are rich; what are they going to miss if I – a poor, hardworking college student – take a bit of food home after my shift, or gives some food to my coworker who just finished his shift, or to my poor college student friend who stops by to see me before heading to the library? I am valuable, and undervalued. The owners and managers of this cafe, well they’re just profiteers. They only got this place and all there money by taking advantage of students like me. Stealing from them is only fair. In fact, I’m taking seconds because this is justice.”