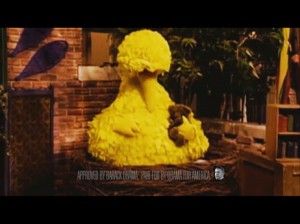 It is good to see Obama rebounding from his mediocre debate performance last week. To get back on track, his campaign launched a new ad attacking Mitt Romney’s priorities for reform. According to the ad – narrated by Pablo Francisco (just kidding) – “Mitt Romney knows it’s not Wall Street we have to worry about, it’s Sesame Street.”

The President has also worked from the stump to put the first debate behind him and set the tone the last four weeks of the campaign.

Here is Obama at a fundraiser in San Francisco:

“Elmo has been seen in a white Suburban.  He’s driving for the border,” he said. “Governor Romney’s plan is to let Wall Street run wild again, but he’s going to bring the hammer down on ‘Sesame Street.’”

In case you’re under thirty and wondering what that Elmo thing is supposed to mean, don’t feel bad, I missed the O.J. Simpson reference on the first pass too. The President was (humorously?) alluding to Simpson’s failed attempt to flee to Mexico after murdering his ex-wife back in 1994. Charming.